You are here: Home » Blog » Couples turn energy into Synergy at Marriage Retreat 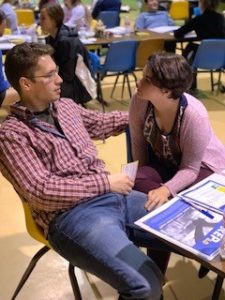 Hearne, TX–There was a certain ‘Synergy’ in the air in Hearne during the first weekend in November.  More than 50 married, engaged and dating couples from around the Brazos Valley attended Strengthening Families of the Brazos Valley’s marriage and relationship retreat.

The two-day retreat held at the First Baptist Church Activity Center was designed to help couples to effectively communicate, work through conflict in a skilled way and to be affectionate with each other.  The retreat also created an environment where couples listened to one another by participating in various individual and group workshops. Couples had the opportunity to right the wrongs of the past by repairing breeches of trust for the future. Newlyweds, Melissa Busby and Justin Busby have only been married for three weeks and decided to attend the retreat.  “We already had a strong and healthy relationship but by attending the retreat reconfirmed our love for one another.  It helped us to build a stronger foundation with each other and how to communicate effectively.  We both have children from previous marriages, but the workshops helped us to come together as a family when it comes to solving problems and doing family activities.” said, Justin.

Couples walked away with tools they need to experience a deeply fulfilling, passionate and lasting partnership. The retreat made it easy and enjoyable to have deep conversations in a safe and structured environment.  Dennis Hoffman and Maria Medrano have been dating for 10 months and found the communication workshop was very helpful to them.  “I realized that even though we are constantly talking, we had not communicated with each other about the more important subjects(finances, relationships, goals). 10 months have really been a date, but now we are heading in the direction of a more serious relationship. The retreat provided great tools for the future that we can use in the event we do run into real or more serious issues or experiences.” said, Maria.

In addition to fulfilling their love, couples also ‘filled-up’ their tummies with catered meals on Friday and Saturday.  Some even won great giveaways donated by businesses from around the Brazos Valley!

SFBV hosts the retreat in the five counties it serves (Brazos, Burleson, Grimes, Madison and Robertson) and each retreat has shown a spike in attendance. “This was the 7th retreat and it has grown both in content and in numbers.  The numbers have increased primarily to the Texas A&M University’s eBlast[email] that we started using last fall, but  I think we’ve also grown due to the increased awareness about SFBV in the community.  We’ve tweaked the content a couple of times, but this last retreat[Robertson County] was the first one we actually increased the content for.” said, Laurie Naumann, Program Manager.

The programs and retreats are fully funded by the U.S. Department of Health and Human Services, Administration for Children and Families.