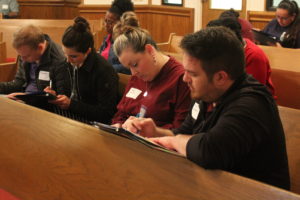 Strengthening Families of the Brazos Valley hosted Synergy: Marriage and Relationship Retreat on Friday and Saturday at the Elizabeth Lutheran Church in Caldwell.

The two-day retreat focused on ‘strengthening’ marriages and relationships. Couples and individuals participated in a series of interactive workshops which featured the SFBV’s staff who shared their insights and knowledge on healthy relationships and other topics.  Couples also learned how to foster good communication, work as a team to solve problems and how personality affects a relationship. Brandon and Victoria Sandage have been married for nearly two years and they enjoyed the “Speaker/Listener” workshop and will use the techniques learned in their relationship. “We learned a great bit of information to use now and in the future. For example, the way to have a conversation amid an argument where there is one speaker at a time and one listener at a time. This allows both of us to communicate our feelings effectively.”, said Victoria.

SFBV has held retreats in Brazos, Grimes and Robertson Counties but this one was the largest ever with over 80 participants in attendance. “Outstanding support from Burleson County and effective marketing strategies contributed to the large turnout. I also have great participants in my program who attended the retreat. They are ready and eager to learn how to strengthening their marriages, relationships and families.”, said Holly Narro, SFBV’s Program Coordinator for Burleson County.

All participants were treated to catered meals and enjoyed taking pictures at the SFBV’s photo booth.  Many couples walked away with great giveaways including a night’s stay in a King Suite at the College Station Hilton, a gift card donated by Walmart in Caldwell and a wine tasting and tour for four at Messina Hof Winery in Bryan.

The retreat was fully funded by the Department of Health and Human Services, Administration for Children and Families.

Plans are already underway for the next retreat in Bryan, TX in April 2018.

Previous post: Couples Work Together in “Synergy” at Retreat