You are here: Home » Blog » Couples Work Together in “Synergy” at Retreat

Couples Work Together in “Synergy” at Retreat 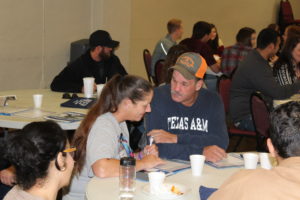 Navasota, Tx–Strengthening Families of the Brazos Valley (SFBV) hosted Synergy: Marriage and Relationship retreat in Navasota this past weekend.

Couples and individuals participated in interactive workshops which focused on dedication, self-exploration, skill-building, friendship and commitment. In addition, participants received tools which they could use to help them to create and maintain healthy relationships and families.

Peggy Richardson-Johnson enjoyed the two-day retreat and hate her husband couldn’t attend. “We have been married for 20+ years but today I learned how to communicate effectively, work as a team to resolve problems and to recognize hidden issues before it develops into a large or an unmanageable issue. I will utilize the tools presented today in my relationship to enhance my relationship with my husband, Harry”  said, Johnson.

This was the third retreat hosted by SFBV in 2017 and over 55 couples attended the retreat making it the largest ever. Chasitdy Love, Grimes County Coordinator said, ” The retreat was a success thanks to all of the hard work of SFBV’s team. We reached out to couples and individuals not only in Navasota but across the Brazos Valley. I hope the couples, after attending the retreat will have increased understanding and procedures for a flourishing relationship.  I hope they will take home and use the tools given for self-development, communication, conflict management , and relationship enhancement.”

Participants were also treated to catered meals and many walked away with great giveaways donated by local businesses in Navasota and Bryan-College Station.

The retreat is totally funded by the United States Department of Health and Human Services, Administration for Children and Families.

Plans are already underway for the next  retreat which will be held in 2018 in Burleson County.